Alex is a college student studying nursing and recently freed from her unbearable helicopter parents. Far from home and trying to get through classes as quickly as possible, she’s grown burnt out and quite lonely. However, she hears about a mysterious social media account filled with images of ruined buildings, rooftop views, and rooms trapped in time, framed by a challenge:

Her curiosity piqued, a spark of rebellious energy stirs within her. She sets out to find the origins of the photos and finds three urban explorers, each of them unearthing something new and unfamiliar in her heart.

This game was made in a little over a month for the NaNoRenO 2020 visual novel game jam.

It was okay but ended very abruptly in my opinion. There was not much focus on building the scene in the story and not too many details. The characters, sort of fall in love really quickly without much effort. Its a good game if you're just starting to play visual novels but if you're looking into well constructed stories that just draw you in, this game feels lacking.

super cute game, i have only done one route, paxton, gotta love dude's with long hair and work at a cafe? he is really sweet and everything, I will do the others later but lovely game, super short and sweet.

First, Finn: OMG that s*** was f****ing deep. As someone who's been where he was, like to a T... except I'm more punk princess than goth..., I admired how he was straightforward about what he's been through and how he's feeling I also like how he manages to find someone even though he still feels that way. I appreciated how he wasn't suddenly and magically healed just because he found someone... but instead was given hope and some strength. Thank you for writing him this way...

Second, Paxton... Magic gooey goodness with a sprinkling of so f****ing CUTE!!! That is how I would describe his path... can someone just like make him? Just hypothetically? In a lab? Preprogrammed to love me? No? Okay... Kidding, but seriously Cute... with a capital everything. Latte foam heart... I mean c'mon.

Third, Zaina. Yes, just yes. I love everything about this sassy little spitfire. I love how she learns better coping-skills than withdrawing when things get rough. I love how she shows her love to her friends... "You idiot." As someone who tends to call friends and loved one's anything from a**hole to zatch (female genitalia) as a joke/ when they worry me. I identify with her in this way.

You did a great job with this game! I love it.

I already said this on the poll, but I might as well say it here.

The plot is intriguing, feels original, and the characters aren’t the cookie cutter Dating Sim/Visual Novel love interest stereotypes I thought they’d be. I’m not a fan of Paxton’s design—it’s big titty gf or goth bf for me—so I never did his route.

I kind of would’ve loved a polyamorous Zaina/Alex/Finn ending. They feel like the most natural relationship. I say this a lot when I play this type of games, but sometimes there’s a couple/route that feels Official™ and in this case that’s them. I see some of myself in each of them, which was nice, too.

Also, I love how Finn is bisexual. Usually, there’s a kind of biphobia/insecurity over having a male LI be bisexual in a way that’s not a fetish of ooh boys kissing for my viewing pleasure when it’s a girl-protagonist VN. I was pleasantly surprised he casually mentions an ex-boyfriend in his route. It was nice. I would’ve liked Alex’s own bisexuality to be more on the spotlight—Zaina is her first time realising she’s also attracted to women, after all—but the game is short and I get there wasn’t time.

When your own name is Zaina , and there is a route with that name o.o

I only did one route and the route was Finn's. I shipped Alex with him when they first spoke to each other. Master shipper, that's me. >:3

This game is really good, i did all three routes and they are all great but i absolutely loved Finn's.

As a Nursing student, this piqued my interest, hoping to also experience the romances TT TT

All routes are nice but only finished Zaina's route tho.

This looks super promising! i love the graphics :>

I'm definitely going to play this!

Hello! When ever I buy games I always try to give money for it (even if it's free). I wasn't able to find any link for donating/ko-fi, is there a way a can support?

Thank you for your offer! Because this project specifically was made by a group of volunteers for a game jam, we've disabled donations on it.

I see, thank you for the response!

Can we change the name on the game?

No, the name is always Alex.

i loved this game!

Played thissss. Gotta say Zaina's route was my favorite. Very cool very cool. I find it very cool to have one of my favorite concepts in life be made into a visual novel.

Thank you for making this- this one of the only games that offer GxG girl and also BxG! <3

I downloaded this game yesterday and it's absolutely boring.

I've only played Finn's route.  Everything it's just random, Finn falls in love with no reason at all, 5 songs or less during all his route which two of them are the most played (the happy song when you're somewhere but the abandoned places and the piano song when you're in abandoned places), some with slightly changes of the ones mentioned above so you get bored of it. The mc it's like "My parents only worry about my marks, I do nothing but studying and i don't have friends, i'm so stressed, oh look! How interesting is this i'm gonna ignore them from now on and know anything from them even though i've been stressed my entire life". Finn's like "Oh, idc to die but don't you dare to die. Omg you were right and i could have risked your life, you should be hating me rn" and the second right after it's like super caring???? In real life when someone says "Hey, it's not your fault" you aren't like "Oh, that's right i'm happy now". You regret for a while, and the MC wouldn't set aside everything so quickly if she was so stressed.

It's sad that could been such a good game if it were realist. I am not trying to discourage, but to improve. Sorry if it's rude.

I love how much detail it has: the characters are complex and inclusive, the stories all match timeline-wise, the rooms and backgrounds look well lived in, the music is not tiring, and the UI is crisp and clear. Definitively a great naNoRenO submission!

Paxton was my absolute favorite.

Thank you, we're happy you liked it!

This was such a sweet and fun game! I don't think (?) I've seen many games about urban exploring either, if at all, so that aspect was really neat. I think I actually learned a thing or two from reading, haha!

I have to echo an earlier comment about Finn - I really appreciated the depth given to his character (and his personality affecting other routes such as Paxton's), and that he felt so fleshed out and well-rounded. All the love interests did, really; it's a testament to the writing in this game, and also how much love and passion the team placed into the project. Great job; I had a wonderful time with this game.

I loved this game, Finn's route is my favorite. I loved how you didn't make him a stereotypical goth character and gave him a unique personality. The music and art where lovely as well and went well with the story. The concept for this game mixed with how the characters interacted with another made it feel real and not just a story. Everyone had a flaw and instead of dancing around it or overlooking it the main character helped them through it while also discovering more about herself. The only bad thing about this gave is a little bug I found during Paxton's route. When you dance with him, a new song starts playing and it overlaps the song that was already playing and sounds like a mess, other than that it was a wonderful read!

Thank you so much, we're so happy you enjoyed it! We'll look into that.

This game was awesome! I've always wanted to explore abandoned places, so this game was super fun for me.I absolutely loved the art! Finn stole my heart, he's so precious. Cerberus is an awesome name for a bunny by the way!

Thank you so much, we're happy you liked it!

Thank you so much for this game and that you are giving it for free!!

This was so amazing! The writing skills/pacing, art, characters...everything was so well done! I just now realized you guys are the same people who created some other games I played, and it totally makes sense how greatly put together this is as I enjoyed your other games too. Thank you for the story!

P.S: This game totally got me into urbexing, haha. I didn't know there was an official term for this kind of thing, but this looks like a lot of fun!

We're glad you liked it, thank you for checking it out! ♥

This visual novel was really cute and fun to read! I think it also did a wonderful job of handling the more serious topics as well. I love the varying personalities of the love interests and also how Alex herself has such an interesting personality! It was nice to see her grow as a person through each route and see her break out of her shell. Both the art and the music are lovely! <3

Thank you very much, we're glad you enjoyed it! ♥

What the heck, why is this so cute!?!? Loved the game and love the urban exploration plotline! That's something that I've always wanted to do so it was fun to live vicariously through Alex. And of course, Finn is absolutely adorable! Who doesn't love a cute goth who bakes and worries about your safety? :)

Very cute game! Everyone has a distinct personality and the music sets up the mood nicely. I'm biased towards Zaina (my favorite) but Paxton and Finn are also sweethearts

Thank you much for playing! ♥ We'll definitely be working on more otomes and visual novels in the future.

Yay! I'm so looking forward to checking this game out.  Thank you for all your efforts!

And thank you for checking it out! 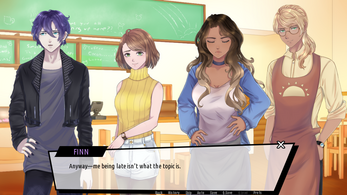 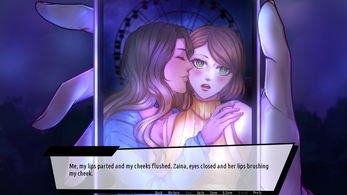 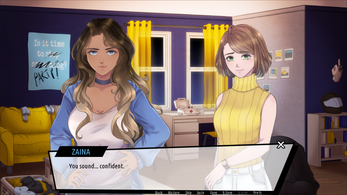 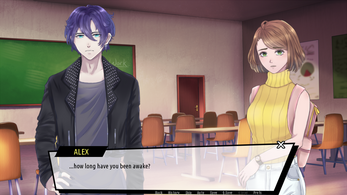 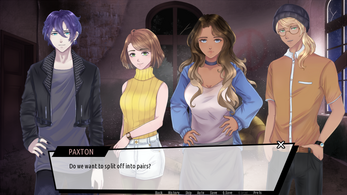 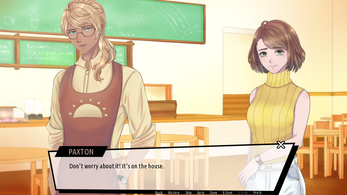 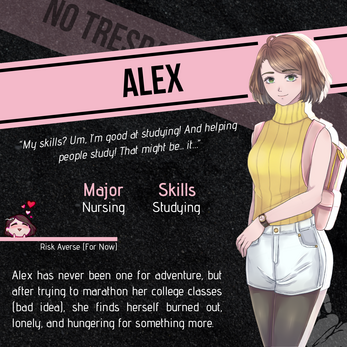 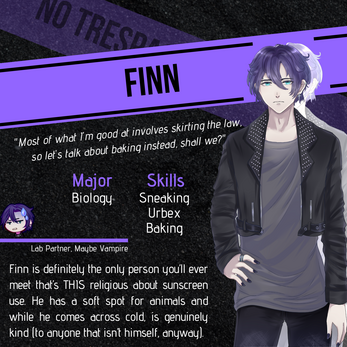 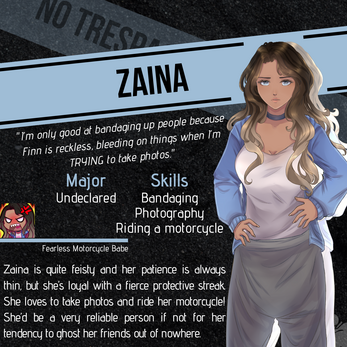 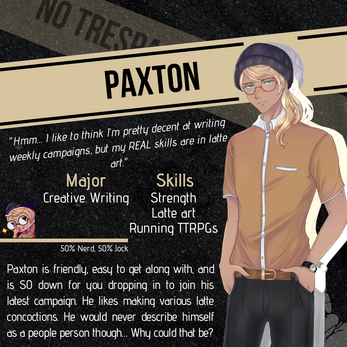