A downloadable game for Windows, macOS, and Linux

Kotachi received a pair of white revolvers after his grandfather died, forged from the constellation Perseus. His weapons target specters, shadow monsters that invisibly attack people... and the Zodiac. As one of the few who can, it's up to Kotachi to both protect these constellations and use their powers in battle to keep everyone safe.

Asterism at its heart is an action visual novel inspired by astronomy elements, namely the constellations that make up our sky- especially the Zodiac. Choices accompany many of the dialogue menus in both play styles, and can determine how side characters end up by the end of the story—including an optional male love interest.

In order to download this game you must purchase it at or above the minimum price of $9.99 USD. You will get access to the following files:

Hi! Finished the demo! It was great, and I'd love to give you guys some feedback to help perfect it! Overall it was a super professional experience and I really enjoyed playing it.

For one thing, I was unable to play the battle mode- I still got that same Ren'Py error when I came home to my kitchen. This only happened in the Battle Mode, the VN Mode worked fine. It's such a shame too, because I really loved the improved battle aspect. I thought the character attacking art added a lot to the experience. I would have also liked to see what the other characters had in terms of skills and weapons.

The beginning dialogue was also much improved. Ophi knew all of the Aligner facts, or at least said he did. The scene avoided some of the pitfalls of the last one where the characters didn't know any of the information.

Art gorgeous as usual, CGs, BGs, GUI amazing. Scene transitions were really cool and a great addition! It would be helpful to show what day it is either using transitions or somewhere always on screen. The battle cut-ins in the VN mode were AWESOME and looked so good! Both modes were great, the VN mode held its own even without the battle mechanic, which was also great. In the future I'll probably play the full game with the battle mechanic but the VN mode only is still an amazing experience.

Some things to work on:

- I think overall the dialogue still needs some refinement.

I didn't get a good grasp on any of the characters, and couldn't discern any significant personality traits, other than Ophi being a little more uptight than Kotachi. Kotachi seems every bit the stereotypical shonen protagonist, which is fine, but I think highlighting his traits that are distinct would be better. I think he might have a gentler side which we only see with V that would benefit to bring out in his personality more. The other characters don't have any personality that I could discern. Even in Levi and Ayane's introductions, no personality traits are displayed. The characters have so much potential and I would focus on their personalities a lot more. I feel like the environment is supposed to be very friendly and they are all supposed to be really likeable, but this was hard to do bc the characters didn't have personalities.

I also think that the worldbuilding is still extremely confusing. There's a lot of exposition everywhere but somehow it just doesn't translate into a good grasp on what is happening. There's a huge amount of blanks before the story that aren't addressed that are necessary to understanding everything. How did the characters get their weapons? (I don't think waiting until day 13 to explain that Kotachi's guns are passed down in the family is a good idea. This should be explained in Day 1.) Who trained Kotachi and Ophi? How come Levi could see specters since forever but no one recruited him as an aligner? Literally any info about Ayame because nothing was explained about her. Just in general about Aligners, do their families know? Is it only within families?

Structure-wise too, things seem wonky. The characters first mission is to pass the exam. For one thing, what exam? Why do the characters need to take an exam if they are already out there fighting specters and doing fine? Who gives the exam out? What age to people take it normally? How come Kotachi's family didn't tell him about it ever? Questions aside, Kotachi is given his real mission, to find the other zodiac constellations, even before he has passed his first mission. Why tell the player about his real mission when they haven't even passed the first one? I also think Gem just choosing Kotachi out of nowhere was strange, and Kotachi was really casual about accepting.

- The additions of Levi and Ayane happen way too fast in the story. (However I could be wrong and their intro happens at day 7. I was unaware of what day it was because it was not displayed) I think that more time of just Kotachi and Ophi fighting together would benefit the story, as the player doesn't have as good of a grasp on Ophi before these other two characters are added. The characters additions should also be staggered, their addition to the team is unrelated from one another and shouldn't happen at the same time.

- Additionally, Ayane's intro and addition to the team didn't make any sense to me. She just comes along to the COIN headquarters. I don't think it was addressed in the narrative that she even is an aligner until we see her fight.

- I'm not sure what the point of being able to talk to Kotachi's mom or dad in the story is other than to prove that they are there. I think they need to be more relevant to the story. It's totally ok not to have their CGs since they're such minor characters but they didn't provide any information. Plus its explained that Kotachi's guns are a family heirloom, so at least one of them is an aligner. The vibe was given that Kotachi is keeping being an aligner a secret from them, but that doesn't make any sense. I think that they should talk to him about the events in the story as at least one of them is an aligner. It would be an easy spot to work in some more expostion.

- The two dialogue choices are often the same and it is clear that they don't branch all that much or impact the story. For example, during one of the last dialogue choices, it's too questions, and for the one I chose, Kotachi asks both questions anyways. So it doesn't even matter what I chose. The choices don't actually have to impact the story but they should at least give the player the impression that they change the dialogue that they see a bit, and that the dialogue isn't identical no matter what they choose. Also, I like the dialogue choices when you can only ask Vulpe one question, but it's kind of pointless when she doesn't even give an answer to the question you chose.

- You might want to remove the scarf from Vulpe's design, or from the other character who wears it. BC of that it's really obvious who Vulpe is, and I think Kotachi would definitely piece it together that very instant. I know I did.

I see so much potential in this game and I would love to see it reach its potential, which it so definitely can! You have already truly succeeded at the artistic/stylistic aspect and the battle aspect, I would love to see the core of the story become really impactful and poignant. Thanks for creating a great game and I'm excited to play more of it!!

What platform are you playing the demo on? We haven't had any problems on Windows but there seems to be an error with running it on MacOS.

That's great to hear! We'll work on refining the character interactions even more before the full game. Some of these points (such as Ayane's motivations, family, and her joining the team) are better shown in the full game as it's over the course of several days, which we couldn't include in the demo for the sake of brevity. We'll work on introducing some concepts a bit earlier on such as their weapons and editing some of the choices to have more meaning!

Thank you so much for putting in the time to play through the demo and give us your feedback, we'll work with it to make the full game even better!

I'm playing it on MacOS. The error was the same error I posted before. It didn't appear in the VN only mode so hopefully its something you've fixed before and its a quick fix.

Thanks for responding and I wish you guys the best of luck! This game is great and I'll definitely be following this project, so I'm excited for further releases!

I hope you don't mind that I made a first impressions video of your game.  Really interesting gameplay elements that you added using Ren'Py.  Overall great work! https://youtu.be/OvRFBnByurc

I also ran into a renpy error when I got home and I was unable to continue.

The game that I was able to play- I loved the aesthetics! The music was nice, the background was gorgeous, and the contellation theme is very unique. The beginning setup seemed very shonen, but the introduction to Vulpe was very magical girl. I think I would have liked a more shonen story. The setup is similar to Twin Star Exorcists, at least from what I could gather. I really liked the main character, he seemed likeable.

Constructive criticism- I think the writing at the beginning could be tweaked. A lot of things were explained on the fly and as a player I couldn't follow it as well as I wanted to. How do the main characters know some things about specters and Aligners, but not other vital information? I didn't understand why they were surprised by some of the info Vulpe was telling them, it seems like they should already know this stuff, right?

I came here and saw these errors/issues, so didn't download it yet. I'm hoping to play it on my stream even if just a couple hours or so of it.

The build was updated last night so there shouldn't be any errors, but please tell us if you come across any!

Will have to give it a try sometime after the Thanksgiving holiday! Thanks for the help

i was playing the visual novel, but when he got home, it said error something and its not letting me play...

This was super fun to play! but on another note, the characters, they look so good! I'd personally rate it a 10/10.

Thank you so much, glad you liked it!

Asterism's demo provides a nice insight into the world of Cystal Game Works' upcoming VN. The use of visual effects and transitions is very immersive and unique, creating an experience that stands-out from other visual novels.

The story itself is very intriguing and well-written, I'm looking forward to playing the final version. The art is also nice too, with plenty of great touches.

Glad your enjoyed it ♥ 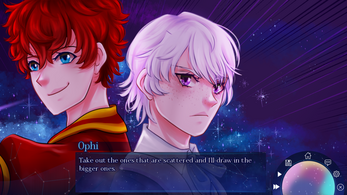 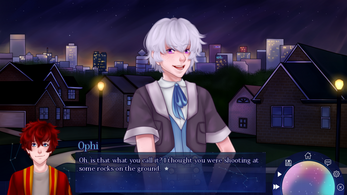 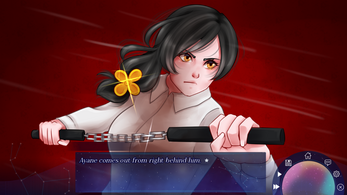 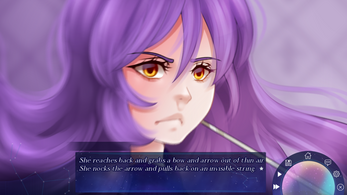 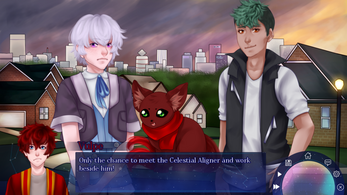 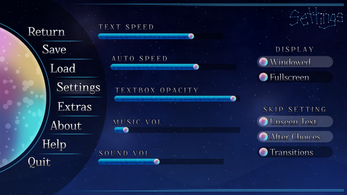